As the main author of THE CHURCHILLS – A Family Portrait (co-author John Lee), Celia Lee was invited by Miss Tina Santi Flaherty to give a series of talks about the Churchill family, in New York, in October 2010.

These were based on THE CHURCHILLS – A Family Portrait, pub. Palgrave Macmillan, New York and London 2010. Accompanied by her husband John, Celia gave the prestigious Hunter College lecture, and lunchtime talks at The University Club, and the Lotus Club. Miss Tina Santi Flaherty then hosted a glittering reception for Celia and John at her Fifth Avenue apartment, overlooking Central Park.

Tina, who is a highly successful businesswoman was the first woman President of Palm Olive, and at one time she had her on TV show. Author of WHAT JACKIE TAUGHT US: Scenes from the Remarkable Life of Jacqueline Kennedy Onassis, Tina is currently researching a book on Winston Churchill’s greatness. Tina, who rented an apartment in the same block to Jackie Kennedy Onassis for thirty years, is a great friend to the Churchill Centre both in the US and in the UK, and her name appears on the honours list at the Chartwell House museum at Winston’s and Clementine’s former country home, Westerham, Kent, England. Mr Barry Singerwho runs the well-known New York Chartwell Book Shop and his staff were on hand with a supply of books for Celia and John to sign and write dedications to patrons. The bookshop specialises in Churchill books.

Celia Lee gave the inaugural lecture in 2011 to mark the setting up by Chairman Mr Nigel Guest and the Committee of the new Churchill Centre chapter at Westerham in Kent. Celia’s talk was on Lady Randolph Churchill’s (Jennie’s) charity and war work titled: White Roses and Lilac Orchids. It took place on Jennie’s 90th Anniversary, 29th June 2011, at Westerham Hall, Kent.

The brilliant American mother of Winston and Jack Churchill was portrayed as a tireless organiser and contributor in peace and in war in the interests of the UK. Jennie’s great-great-grandson, Mr Randolph L. S. Churchill who is President of the chapter, introduced Celia to the audience. Chairman, Mr Nigel Guest, officiated, and also operated a slide show of pictures of Jennie and her family, portraying scenes from her substantial life.

(Left) A section of the audience at Westerham Hall, Kent 29th June 2011, attending the inaugural lecture given by Celia Lee in honour of Lady Randolph Churchill’s (Jennie’s) 90th Anniversary. 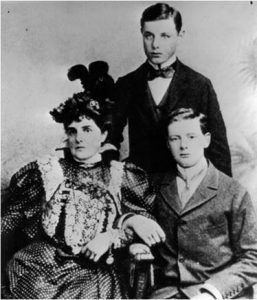 (Above) Jenny, Lady Randolph Churchill with her sons Jack (standing) Winston seated beside her. 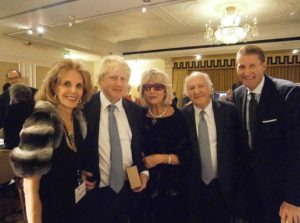 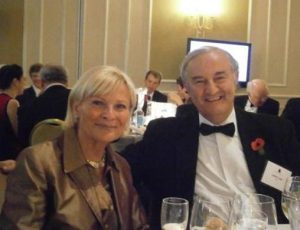 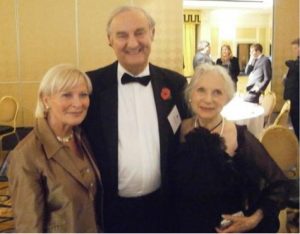 In November 2011, Celia, accompanied by John, was invited to Budapest by Mrs Katalin Lantos, Managing Director of General Press. The Lees’ book: THE CHURCHILLS – A Family Portrait was been translated into Hungarian by Mrs Veronika Banki. In Hungary the book is titled: A CHURCHILL DINASZTIA (dynasty). The book launch took place in the prestigious Alexandra Podium of the Alexandra Book Store, Budapest. The guest of honour was Mrs Dalma Mádl, wife of the former President of Hungary, Mr Ferenc Mádl. Over dinner, Celia and John were presented with a number of gifts by Mrs Katalin Lantos, and later by Mrs Dalma Mádl, and Mrs Veronika Bánki. 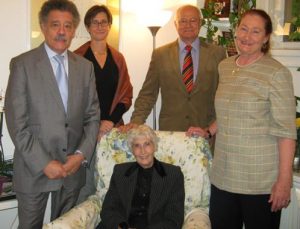 (Above) Celia and John met Mrs Dalma Mádl, (seated) wife of the former President of the Republic of Hungary, Mr Ferenc Mádl. Also in the picture, left to right: Mátyás Sárközi, writer, resident in London since 1956, and grandson of the famous writer Ferenc Molnár; Mrs.Klara Breuer, former Counsellor of the Hungarian Embassy in London and chief of cabinet of the Minister of Foreign Affairs of Hungary; Mr. Pál Rudas, husband of Mrs. Breuer; Mrs Veronika Bánki. 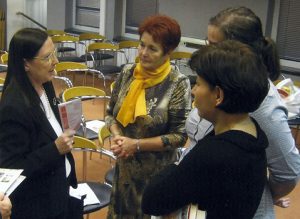 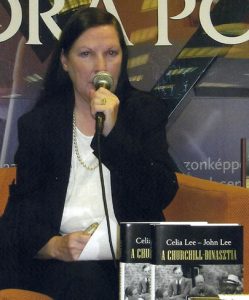 (Above) Celia Lee answering questions for the audience at the book launch held in the Alexandra Podium, the Alexandra Book Store, Budapest. There was tremendous interest in the late Sir Winston Churchill.

(Left) Mrs Veronika Bánki with the edition of THE CHURCHILLS A Family Portrait that she translated into Hungarian for General Press, Budapest, now titled: A CHURCHILL DINASZTIA. Veronika appeared on TV recently in Budapest discussing the book.

A week in historic Budapest

With Mrs Veronika Bánki acting as guide and interpreter, and Mr Gabor Zech and Veronika’s daughter-in-law Mrs Krisztina Arvai-Nagy, all of whom speak fluent English, acting as interpreters at different times, Celia and John enjoyed a wonderful week in a Budapest.

They were put up in a lovely apartment near the River Danube, and Veronika took them to see the sights. First was the ancient and original capital, Esztergom, dating to 11th Century, and which remains idyllic today, with Roman remains and artefacts that have been excavated on display. Then the National Gallery, which holds many wonderful oil paintings. On to Budapest City Park, where they viewed the bronze bust of Sir Winston Churchill next to one of US President Ronald Regan.

Celia and John were interviewed for the National Channel of Kossuth Radió i.e. Hungarian State Radio by the well-known journalist and broadcaster, Judit Cservenka. A number of reviews and articles focusing on A CHURCHILL DINASZTIA have since been published in the Hungarian press, journals, and magazines. 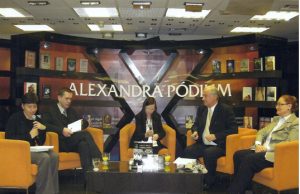 One of the interesting developments that took place during the trip was that at a dinner arranged by Mrs Veronika Bánki at her apartment in Budapest, Celia was introduced to Professor Miklos Lojko. Professor Lojko was partly educated at the University of Cambridge where he took a Ph D. Today, he holds two chairs at two universities in Budapest: The Central European University and Eotvos Lorand University. He speaks fluent English, and encouraged by Celia is now setting up a new chapter of the Churchill Centre for Hungary.